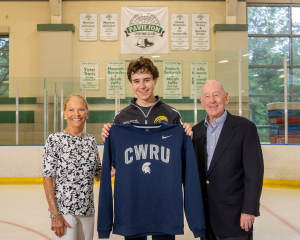 “Hayes and I are thrilled to have a scholarship named after us that supports local figure skaters quest to continue their education”, said Carol Heiss Jenkins. Jenkins added, “we believe education is the foundation to achieving goals and enjoying a well-balanced life”.

Inspired by the skating and academic achievements of Carol Heiss Jenkins & Hayes Jenkins, Cleveland Championships 2000 established the Carol & Hayes Jenkins Scholarship in 2021. The scholarship is awarded annually to a local skater who has excelled in athletic and academic achievements, and who is graduating from high school with plans to attend college in the next six months.

Cleveland Championships 2000, the local organizing committee for the 2000 and 2009 U.S. Figure Skating Championships, maintains an active role in the growth and development of figure skaters and skating clubs in Northeast Ohio through merit awards, grants, and scholarships.